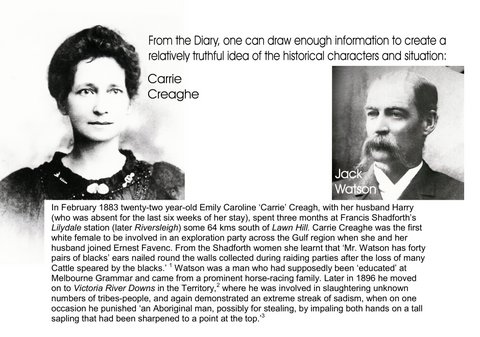 From the Diary, one can draw enough information to create a relatively truthful idea of the historical characters and situation:
Carrie Creaghe

In February 1883 twenty-two year-old Emily Caroline ‘Carrie’ Creagh. with her husband Harry (who was absent for the last six weeks of her stay), spent three months at Francis Shadforth’s Lilydale station (later Riversleigh) some 64 kms south of Lawn Hill. Carrie Creaghe was the first white female to be involved in an exploration party across the Gulf region when she and her husband joined Ernest Favenc. From the Shadforth women she learnt that ‘Mr. Watson has forty pairs of blacks’1 ears nailed round the walls collected during raiding parties after the loss of many Cattle speared by the blacks.’ Watson was a man who had supposedly been ‘educated’ at Melbourne Grammar and came from a prominent horse-racing family. Later in 1896 he moved on to Victoria River Downs in the Territory,2 where he was involved in slaughtering unknown numbers of tribes-people, and again demonstrated an extreme streak of sadism, when on one occasion he punished ‘an Aboriginal man, possibly for stealing, by impaling both hands on a tall sapling that had been sharpened to a point at the top.’3

1 P Monteath (ed), The Diary of Emily Caroline Creaghe Explorer, Corkwood Press, North Adelaide, 2004, Diary Entry 8 February 1883, p.26.Carrie Creaghe was the first white female to be involved in an exploration party across the Gulf region when she and her husband joined Ernest Favenc.